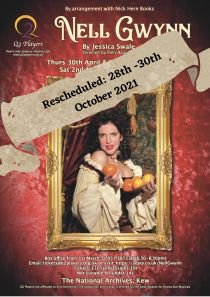 The Restoration of the monarchy in 1660 brought with it a burst of energy and innovation. The King, Charles II was interested in science, exploration, trade and the theatre. And women. Lots of women.

The most popular of those women was, and remains, the incomparable Nell Gwynn. From her downright disreputable beginnings she rose to prominence as an actress through her wit, her humour, her vivacity and a tremendous talent for comedy.

In Jessica Swale’s Nell Gwynn, Charles is asked what he sees in the theatre. He replies “Joy – and gaiety”.And, as he later points out “What’s the point of having a country if it’s sapped of all joy?”

So come and join us for this wonderful play, full of joy and gaiety!

If you would be interested in directing a future production, get in touch with the committee by emailing q2players@gmail.com